This is the story of how approximately 150,000 people with type 1 diabetes will die, and one among them, a vibrant, healthy and lovely 17-year-old girl who did die, due to a side effect of insulin.

Insulin, which many think is a cure for type 1 diabetes, is not a cure but a medicine that lowers blood sugar. Sometimes so much, that you die. Did you know that?

This ad ran on Nov. 2 and touched off seismic aftershocks among diabetes bloggers and online advocates. 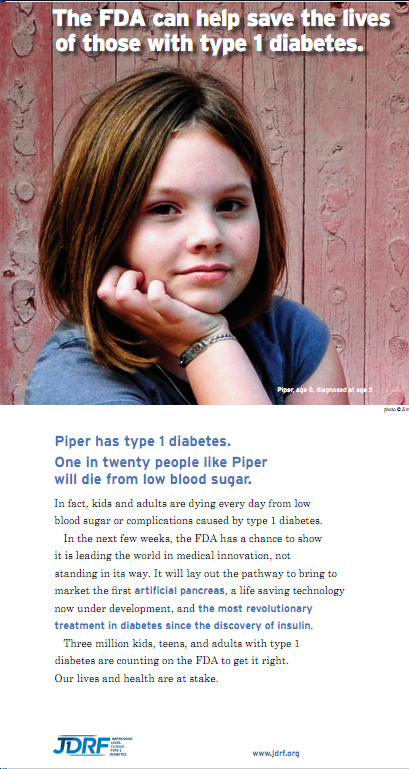 Most who read the ad were stunned. Parents who have a child with diabetes were terrified or angered. The emotional-hit prompted many to question such an unbelievable figure: 1 in 20 people (an estimated 2-4 percent and 6 percent in patients younger than 40 years old) will perish from severe hypoglycemia.

Of the estimated 3 million people in the U.S. with type 1 diabetes, that’s approximately 150,000 people. That’s like wiping out Chattanooga, Tenn. or Rockford, Ill. — wiping them right off the map.

He said JDRF ran the ad because they want the FDA to understand that tools and technologies, such as artificial pancreas technologies, exist to minimize dangerous low blood sugar; that research shows predictive algorithms can minimize hypos by up to 80 percent.

Yes, life-saving and life-changing tools are, even as you read this, being used in other countries, but not here. Take the Medtronic Veo insulin pump. It suspends insulin delivery when a person is already suffering from low blood sugar and is non-responsive. More insulin will drop their blood sugar dangerously further. The Veo has been available for more than two and a half years in over 40 countries. Yet here it is still waiting FDA approval.

Stacy Goodman Died in Her Bed

Four years ago the idea that you could die from low blood sugar became real for me. It was a chilly fall day when I took a train from Grand Central station in New York City to meet Marc Goodman. We sat across from each other in stark daylight in a quiet conference room at his company. He told me about his 17-year-old daughter, Stacy, who upon the precipice of starting her life didn’t wake up one morning.

“Stacy was diagnosed with type 1 diabetes a month shy of 4 years old,” Goodman began. “We immediately took her to the hospital where she was in intensive care for 10 days. The endocrinologist in the hospital told us how lucky we were that she had diabetes, and that it was going to be cured in three years.

“We raised Stacy to believe she could do anything as long as she did the things that were necessary to have that. When she was young we sent her to a camp for girls with juvenile diabetes. She came back so confident. Stacy played tennis and softball and she was getting ready for college.

“From the day she left the hospital after her diagnosis she was never back in the hospital. She knew her body, knew how to manage it and she had no complications. We were so thankful.

“It’s like there never was an event in her 13 years with diabetes and then one morning she didn’t wake up. I had seen her that Sunday and we had a great day. The next morning my ex-wife found Stacy in bed not breathing. They said she had a hypoglycemic reaction and her heart seized. They called it ‘dead in bed.’

“I had to do something to make some sense out of why someone so young and nice and intelligent, who wanted to be a doctor and find a cure for diabetes, died for no reason. I had to make Stacy’s life count, so I created the Stacy Joy Goodman Memorial Foundation. I have only two hopes. That I will be alive when there’s a cure, and that my son never gets diabetes.”

Most people who know me don’t know there’s rarely a night I go to sleep without thinking in the back of my head, Will I make it through the night? A chilling aspect of a condition most people think is about not eating candy.

Response to JDRF Ad From Diabetes Bloggers and Advocates

Jessica Apple, who like her husband has type 1 diabetes, wrote in her post, “This Diabetes Awareness Month Tell the World You Aren’t Equal,” “I’ve always known the stakes are high. That’s the reason when I wake up in the middle of the night, I sometimes touch my husband’s forehead to see if there is sweat on his brow. If there is, I wake him to check his blood sugar. That’s the reason I cried when I first injected insulin into my thigh before I went to sleep. It wasn’t the pain. It was the thought of the two of us sleeping on insulin (and maybe not waking up).”

There’s rarely a night a parent of a child with diabetes sleeps without fear. Meri Schuhmacher, a mom of three boys all with type 1 diabetes said, “The world has no understanding of the daily grind and worry that accompanies us day in and day out. One of my boys was throwing up from ketones (a dangerous by-product of the body burning fat instead of glucose) last night and another’s blood sugar was 43 mg/dl at 2 a.m.” [Below 70 mg/dl is low blood sugar, below 50 mg/dl dangerously low.]

Diabetes blogger Barbra Wagstaff, also a mom of a child with diabetes wrote:

Those who have (type 1) diabetes living in their house are well aware of its dangers. We remind our loved ones to test (their blood sugar) and be in range before driving anything from a bicycle to a motor vehicle. We wake up multiple times throughout the night to test (our children’s blood sugar) and make sure that our loved ones are safe. We know that diabetes is a deadly disease.

Impassioned entrepreneur Robert Oringer, who’s constantly searching for and bringing to market innovative technologies to make life more manageable for people with diabetes — and father of two sons with type 1 diabetes — told me he has a hope and a vision. That first responders — paramedics, police officers, fire people, schoolteachers — and the world at large, understand the dangers of low blood sugar so well that anyone will know how to help someone with diabetes who’s having a low blood sugar episode.

Those of us who live with type 1 diabetes, and those of us who work as advocates, are mystified at the FDA’s slow and disengaged response to medicines, devices and technologies that can help us save our lives.

I haven’t spoken to the FDA but if someone wants to contact me, I’d love to hear from you.

Next time you see an ad for diabetes I want you to think about what you’re not seeing. The 3 million of us with type 1 who go to bed every night with a faint thought in the back of our head, “Will I wake up tomorrow?” The parents who no longer sleep soundly.

That’s why we’re anxious for a cure. And until a cure is found, we’re still waiting for the tools that will help us and everyone we know with type 1 diabetes not be “1 in 20.”

I just wanted to add to the unawareness stories with a quick one I had from the other day.  I was at the border for the states trying to get a visa to work, anyway, I had been waiting around for a few hours, and I was extremely hungry and feeling sick because of it(my stomach gets upset when I don’t eat for awhile). Anyway I finally talk to a border guard and I’m like “Sorry I’m not talking loud my stomach kind of hurts from not eating”. He goes, “Oh do you need a snack of some sort”. At… Read more »

As a type 1 diabetic I really appreciate you shedding a light on type 1 diabetes. It seems today that type 1 is very much overshadowed and people don’t grasp the seriousness of it. I’m thin and I weigh 160 pounds, and when I tell people that I’m type 1 diabetic they either say “Oh, just lose some weight” or “What’s it like to not have sugar” I wish people were more informed about the differences between type 1 and type 2. I enjoy your writing, and I look forward to reading more

Good catch. I should have said “too low blood sugar.”

We all wonder if we’ll make it through the night.