Recently, while traveling to Arizona to give a diabetes workshop, I was struck again by the lack of knowledge and urgency many physicians have regarding diabetes.

Seated at the airport, my husband was talking to a woman about health, whose clearly-overweight mother was sitting next to her. The woman said her mother was on a lot of pills and her doctor wants to put her on another one. My husband asked, “Does she have diabetes?”

“No,” said the woman. My usually-quiet husband persisted, “Has your mother had a recent blood sugar test?”

“Yes, her blood sugar was 187,” said the woman. “But the doctor said that’s nothing to be concerned about.”

Depending on the test, a blood sugar of 187 mg/dL (10.3 mmol/L) can very much be something to be concerned about. It may mean you may either have diabetes or pre-diabetes. “What did her doctor advise her to do?” I asked, expecting at least lifestyle guidance if not medication.

“Nothing,” said the woman staring at us, confused.

About one-fourth of the nearly 26 million people in the U.S. with diabetes don’t know they have it. That’s a little more than 7 million people walking around with undiagnosed, untreated diabetes.

Of the nearly 80 million Americans with pre-diabetes, far fewer likely know they have it — even while most medical professionals consider pre-diabetes the first stage of Type 2 diabetes.

Plus, people with pre-diabetes, just like those with Type 2 diabetes, are at higher risk for heart disease, stroke and eye disease.

Unfortunately, many family physicians have not been specifically trained in diabetes. As endocrinologist Irl Hirsch told me, they probably got a half day training on diabetes in medical school 25 years ago.

Many simply aren’t knowledgeable about the latest guidelines for diagnosing diabetes, newest medications and devices, or recommended treatment protocols. Nor do some seem to take higher than normal blood sugar seriously, caution their patients and recommend lifestyle changes — like healthy eating, weight loss and activity.

Know the facts. First, know if you’re at risk for diabetes.

Risk factors for Type 2 diabetes. You:

If you have one or more risk factors, get your blood sugar tested. Tests to diagnose diabetes:

3. A1C test — Gives your blood glucose average over the past three months. It doesn’t require fasting. An A1C of 6.5 percent or above indicates Type 2 diabetes, and 5.7 to 6.4 percent indicates prediabetes. 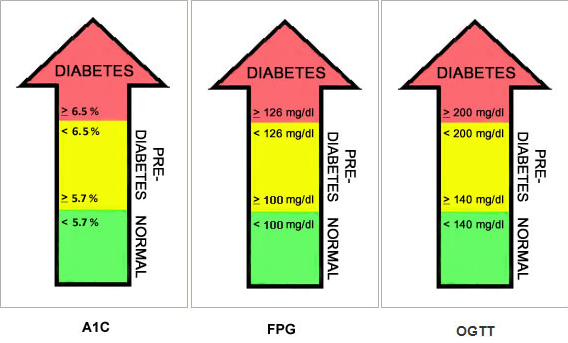 (Graph from the American Diabetes Association. Used with permission.)

Diabetes is increasing so quickly that at least one-third of Americans born after 2000 are expected to get Type 2 diabetes. Diabetes is the seventh leading cause of death in the U.S.

Ask for a blood sugar test if you have a risk factor for diabetes and compare your result to the ranges on the graph. If you’re in the range for diabetes or pre-diabetes, ask your doctor what you should do. If your doctor doesn’t advise you to do anything, consult another doctor.

“Talk to your doctor,” as pharmaceutical commercials urge us to do, may not be the answer when it comes to a diagnosis of diabetes. Take charge of your own health; it’s in your, and your family’s, interest.

While diabetes complications take years to develop, many people already have complications when diagnosed because they’ve had undiagnosed, untreated diabetes and pre-diabetes for years. And while celebrities rail on TV, “Diabetes doesn’t control me, I control my diabetes,” first, you have to know that you have it.