The other day, Chris Bishop (Type 1 Tidbits) wrote a very compelling blog post called “Diabetic Superheroes.” He said, rightfully, that anyone who deals with a chronic condition is a superhero and deserves to be recognized as such, especially since it’s such a thankless job.

A number of people (including many medical professionals) make bold claims that anger should play no role  in managing a chronic disease like diabetes. Some of these individuals suggest that acceptance is, or should be, a key component to effective, ongoing self-care. I can’t tell you how many diabetes educators cling to this belief, because over the years, I’ve met simply too many to even try to recount here.

David Mendosa, whose great work I admire tremendously, recently posted about this very subject, with a story featuring the provocative title “Are You A Noncompliant Diabetic?”. While I agree 100% with David’s well-written article about “Incorrect Diabetes Terms,” I take issue with the contention that getting angry is as unproductive as calling patients noncompliant or diabetic.

David cites a new study in the medical journal Hormones and Behavior, that shows that when people get angry, their heart rates and arterial tension increase along with other psychobiological changes. Those may very well be accurate facts, but I still believe that healthy anger can lead to some very productive outcomes, and for some people, may actually play a vital role in effective self-care.

In fact, healthy anger can mean we have much more personal power and energy to help solve problems (which is needed on a daily basis to effectively manage a rapidly-morphing disease like type 1 diabetes, where insulin dosages defy the rules at almost every turn). The key is to acknowledge that anger is a healthy and natural emotion, and then learn to channel that emotion and use it in healthy and productive ways. 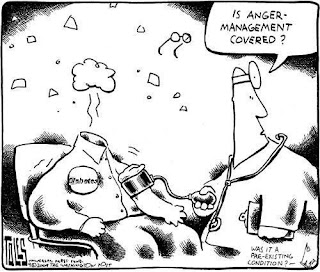 Personally, I think the minute I “accepted” diabetes into my life was also the same moment that my diabetes management went into the toilet because I viewed it as so permanent. To me, diabetes acceptance equals defeat. By accepting diabetes as a permanent part of life, I had little energy or even willingness to stay on top of it, and my health was impacted. When I accepted and welcomed diabetes as a part of who I was, my self-care (and my HbA1c) was much, much worse than it is today. I would argue that anger about the diabetes was a far more effective self-care motivator, and continues to be many years later. In fact, my care did not improve until I completely rejected the idea of accepting and welcoming diabetes into my life. It was only after I channeled my anger and rejection of diabetes into self-care, as well as into fundraising and advocacy, that I achieved better significantly better results. So for those of you who claim that we need to “accept” diabetes, I have always said no way.

Fight against it.  Diabetes should always be treated as an unwelcome guest in your body and in your family, and it does not belong there.

Sure, some CDEs and doctors will point to yet another study of the obvious and ask what evidence I have that anger plays a role in effective self-care. I think my HbA1c’s speak for themselves, both before and after my outright rejection of the idea of diabetes acceptance. But for those pin-heads that ask for clinical data to back my assertions up, let me refer you to one of my earliest blog postings, nearly 5 years ago (September 29, 2005) in which I cited a then recent study that showed medical research spending had doubled, yet all of this research had yielded mostly disappointing results. My personal experience proves that anger can indeed play a critical role in diabetes self-management (as it should), so I don’t need more validation than that. In fact, we can and should argue that acceptance might actually have the opposite effect on good self-care behavior, when that anger is channeled properly.

I think one way that “anger” can effectively help deal with diabetes is best demonstrated by the birth of a not-so-little nonprofit organization now known as The Juvenile Diabetes Research Foundation (JDRF), whose very roots were born in anger, not acceptance. That emotion has helped turn millions of frustrated parents and family members into a fundraising and lobbying dynamo (see here and here for 2 interesting presentations on the role of advocacy for JDRF), and that organization has arguably done far more to alter the course of diabetes research prioritization than a much longer-established diabetes organization like the American Diabetes Association has. In effect, parents’ and patients’ anger has been channeled into an organization whose goal is not to maintain the status quo of treating diabetes in perpetuity, but to eradicate this disease completely, and put themselves out of business.

In the words of Lee Ducat, one of JDRF’s founders in 1970 and the first president of the organization: “When you have children with an incurable disease, you have an insatiable appetite to do anything and everything you possibly can to help them, and that’s why I started this foundation. I’m optimistic that a cure is going to be found and the Juvenile Diabetes Foundation can go out of business.”

Of course, that promise has yet to be fulfilled, but if it weren’t for the JDRF, we would be much further away than we are today, and I think the evidence speaks for itself as far as advances are concerned. And anger, I think, played a key role in that. In fact, one could argue that more anger about type 2 diabetes could actually go a long way towards changing the research priorities for that form of the disease, possibly advancing cure-related efforts there at a faster pace than we have seen to date. We need look no further than looking at how AIDS activists like Act Up which was the very definition of a patient political advocacy, turned the paradigm on its head. In 2004, The Wall Street Journal wrote, in reference to JDRF,  “Not since AIDS advocates stormed scientific meetings in the 80’s has a patient group done more to set the agenda of medical research.”  That same anger also needs to be unleashed against type 2 diabetes, or I fear we’re likely to see just more of the same (which frankly, isn’t working very well) for a long time to come.

For me, anger with diabetes is what motivates me to fight so hard against it, and therefore manage this disease as well as humanly possible given the relatively rudimentary tools we have to do the job. But that anger is also what keeps me motivated to continue fighting against it, by fundraising and sharing these views with others. Above all else, I think it’s time to finally recognize the tremendous value that anger actually does bring to the equation.